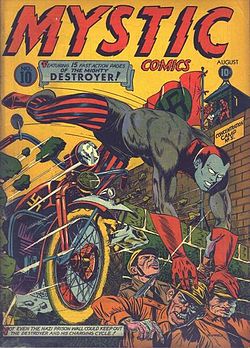 “WITH DOOM ON ALL SIDES, THE DESTROYER PLUNGED INTO THE TERROR DEN…” That’s from the cover of what is probably my favorite Marvel superhero comic.

A superhuman scrapper from comics’ Golden Age (1940s), ..the mighty Destroyer, as his comic covers called him, had a creepy routine that set him apart from Captain America, Submariner and the superheroes, who came later, in the Fifties and Sixties. He looks like combination of Captain America and Spawn, if you can picture that, ..and reads something like an old Shadow radio show – yeah, kinda’ creepy. I read a couple of reprints in a coffee table book, and I was hooked.

Unfortunately, his best adventures end in the Forties, and I’m not sure why Stan Lee didn’t find some way to update him, ..the way he did the Human Torch, the Vision and Black Widow.

‘Drax the Destroyer’ from Guardians of the Galaxy was an attempt to do that, I guess, ..but never got into him. Blackbolt of the Inhumans might be a cool surrogate Destroyer, if some really good writer could get him off his pedestal and into a good solo story or comic series. Blackbolt’s kind of stiff, ..but, Marvel seems very comfortable with him, that way. I doubt the rumored, upcoming ‘Inhumans’ project will change that, ..but keeping fingers crossed.

Google him, when you get a minute.

One thought on “Weirdass Golden Age: The Destroyer”